“No free man shall be distrained

The recent passing of Tom Berger brought an outpouring of tributes and accolades for his long, unparalleled career as a legal groundbreaker and social justice advocate for Canada’s Indigenous people. Less well-known is that Tom Berger got his first taste of fighting against injustice as a young Vancouver labor lawyer in a case that arose directly from one of the city’s most terrible events.

On the afternoon of June 17, 1958, two spans of the Second Narrows Bridge being built across Burrard Inlet suddenly collapsed, hurtling workers and twisted steel into the deep ocean waters far below. The tragedy claimed 19 lives, including 14 members of Local 97 of the Ironworkers Union. It remains Vancouver’s worst industrial accident.

Looking out from his downtown office window, Tom Berger was among thousands of Vancouverites who gasped in astonishment that day at the sight of the two collapsed spans. Less than a year later, he would be in court, representing union ironworkers, some of whom had been on the bridge and survived when it went down.

The year after the 1958 collapse of the Second Narrows Bridge, a strike by Ironworkers Local 97 left an unfinished section of the bridge hanging over a busy road. Dominion Bridge wanted the union to allow a crew to finish the span and anchor it to the next pier. The union refused.

The issue was straight-forward: on the grounds of safety, could ironworkers on a legal strike be ordered by the court to complete a section of the resumed bridge construction that overhung a busy roadway, upheld only by falsework?

The company claimed that an earthquake or some other event could bring the structure down on traffic, if it were not quickly completed. The ironworkers retorted: if the structure is in risk of collapse, it must also be unsafe for us to work on it. 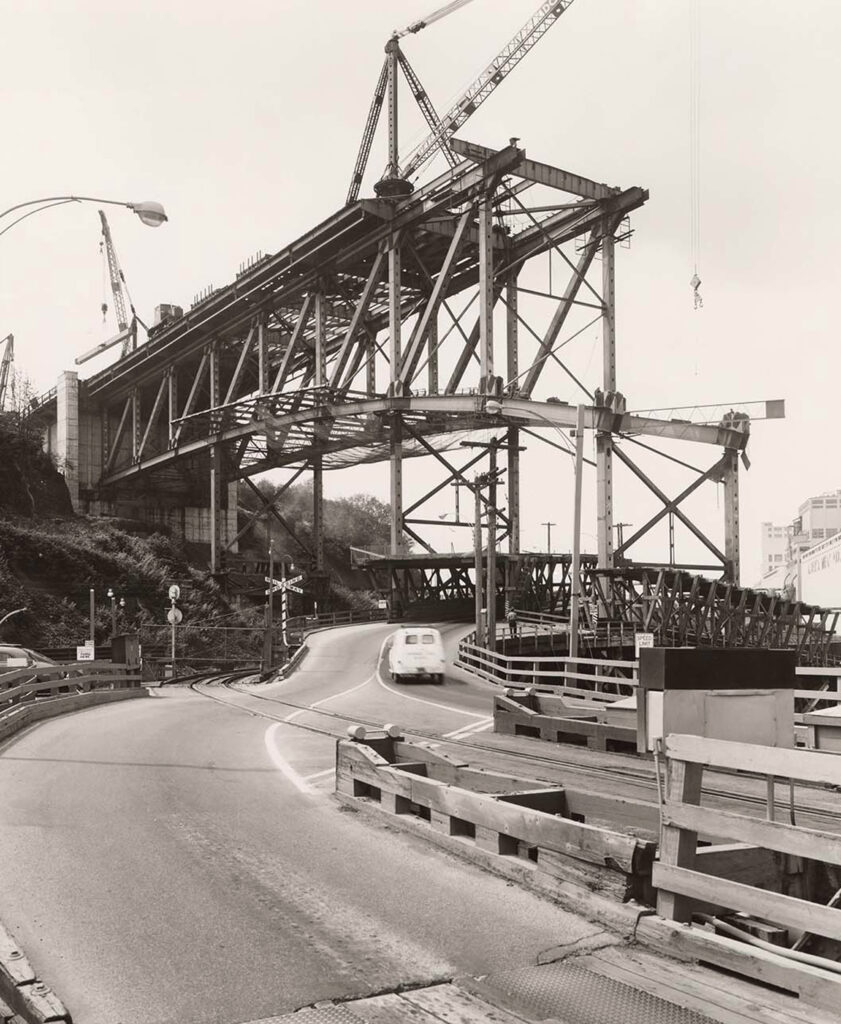 In 1959 striking ironworkers refused to secure the unfinished overhang of the Second Narrows Bridge to the next pier. “If the structure is in risk of collapse, it must also be unsafe for us to work on it”. | Otto Landauer photo, Jewish Museum & Archives of BC, LF-36342

The presiding judge, Mr. Justice Alexander Malcolm Manson of the BC Supreme Court, sided with the company. He issued an injunction, ordering the union to ensure that section of the bridge was completed, despite their strike.

The injunction was ignored, and the legal battle was on, pitting the fresh-faced, 26-year-old Berger against the stern, crusty Justice Manson, 50 years his senior, who was called to the bar way back in 1908. Appealing the injunction on behalf of Local 97, Berger argued the judge had no authority to order a union to abandon a legal strike.

Not only that, but he also contended, “if this bridge is in a dangerous condition then it is just as dangerous if the men are on the bridge, as if they (remain on) strike,” the young union lawyer contended. The judge responded by issuing an added order that the union specifically instruct its members to return to work to finish the job. 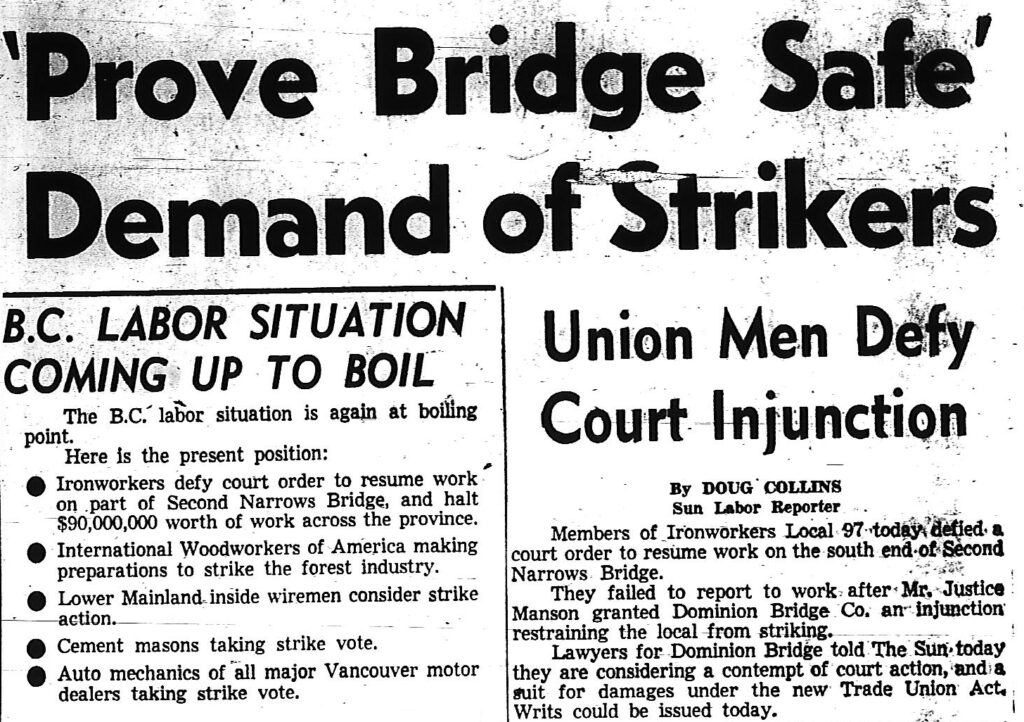 When no one showed up on the next work day, Dominion Bridge asked the judge to find leaders of Local 97 and thirty-one striking ironworkers guilty of criminal contempt of court for defying Justice Manson’s injunction. Union leaders, however, swore affidavits that they had, in fact, instructed members to return to work. They had simply not been obeyed.

The judge was furious. “We have in Canada what is known as the rule of the law. We live by that,” he thundered. “And the rule of law must be maintained.” Turning towards their lawyer, he concluded: “If you have anything to say, Mr. Berger, now is your chance.”

Berger was more than ready. He pointed out union leaders had obeyed the injunction by telling their members to go back to work. But nothing could force individual ironworkers to resume building the bridge. Then, he revealed his legal ace in the hole.

Berger’s Ace in the Hole

He told the astonished judge that his position was vindicated by none other than the most sacred of all British Commonwealth legal documents, the Magna Carta, itself. The hallowed charter of rights had been agreed to by King John on the fields of Runnymede in 1215. And there, in Chapter 15, were the words: “No free man shall be distrained to make bridges.” This referred to former feudal obligations eliminated by the Magna Carta. 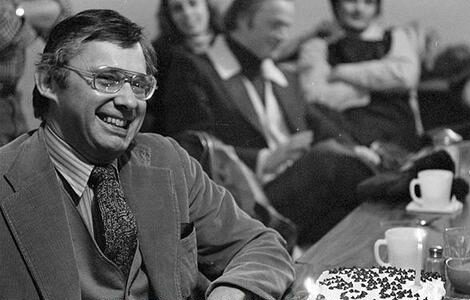 Berger argued the document was “just as much in force in British Columbia today as it was in England in 1215.” Judge Manson accused the youthful brash barrister of playing to the gallery. He brushed the Magna Carta aside, along with all other positions advanced by Berger.

Incensed that no ironworkers had yet gone to work, Judge Manson had sheriffs round up those they could find and began questioning them on his own. The first time Berger raised an objection, the judge angrily dismissed it. The second time, he snapped at Berger: “Just sit down. I am doing this. You keep your seat.”

A third time, Judge Manson threatened Berger with contempt of court for interrupting his questioning of ironworker Eric Guttman. The crowded courtroom erupted in jeers. Despite silencing Berger, the judge got nowhere with Guttman, who corroborated the union’s contention that he had been told to go back to work on the bridge.  “But it is a free country and nobody can force me to go to work to build a bridge if I don’t want to.” 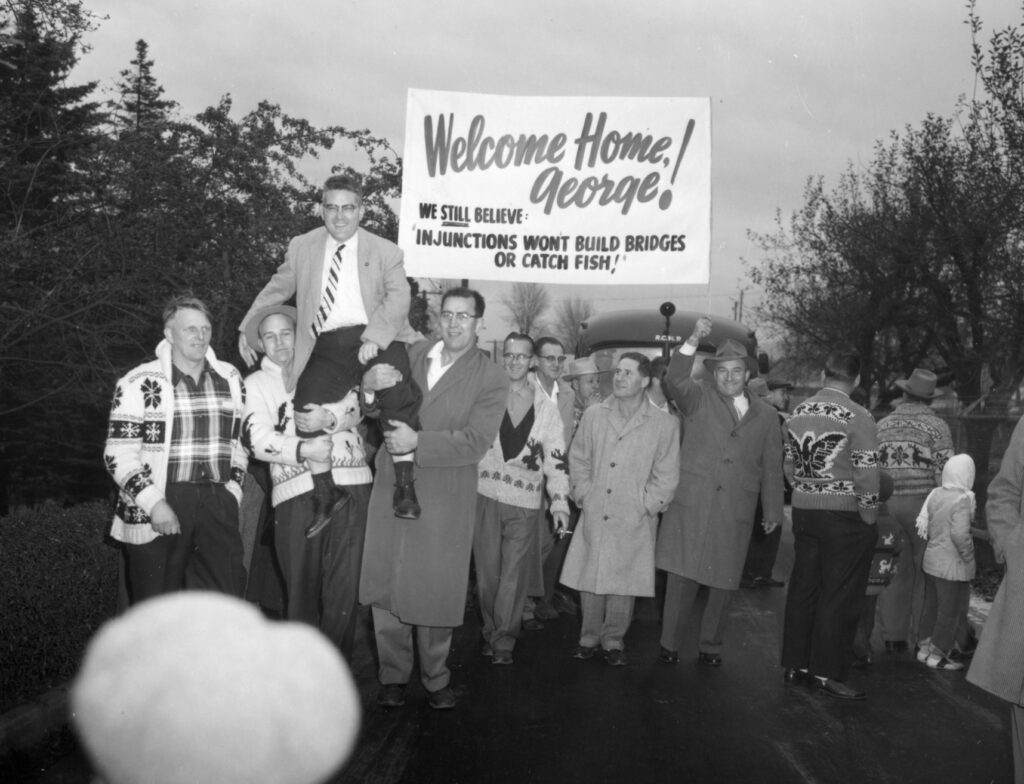 George North, editor of The Fisherman union newspaper is welcomed home from 30 days in Oakalla prison for contempt of court. Ralph Bower photo, UBC Rare Books and Special Collections, BC_1532_2_1

The judge was not amused. In an astonishing display of vindictiveness, he found the union’s two business agents and its president guilty of criminal contempt of court, fining them $3,000 each, a huge sum in those days, with the option of a year in jail.  In the meantime, they were arrested and sent to Oakalla.

The three were released, after the labor movement rallied to pay their fines. As well, Local 97 was fined $10,000 and Eric Guttman assessed $100. Ironworkers were not the only ones to feel the sting of Judge Manson’s wrath. George North, editor of The Fisherman union newspaper, was also fined $3,000 and jailed for 30 days, merely over an editorial he wrote suggesting that injunctions don’t catch fish or build bridges. That was contempt of court, too, the judge ruled.

A negotiated settlement ended the ironworkers’ strike shortly afterwards, and on Aug. 25, 1960, the completed Second Narrows Bridge was at last opened to traffic. 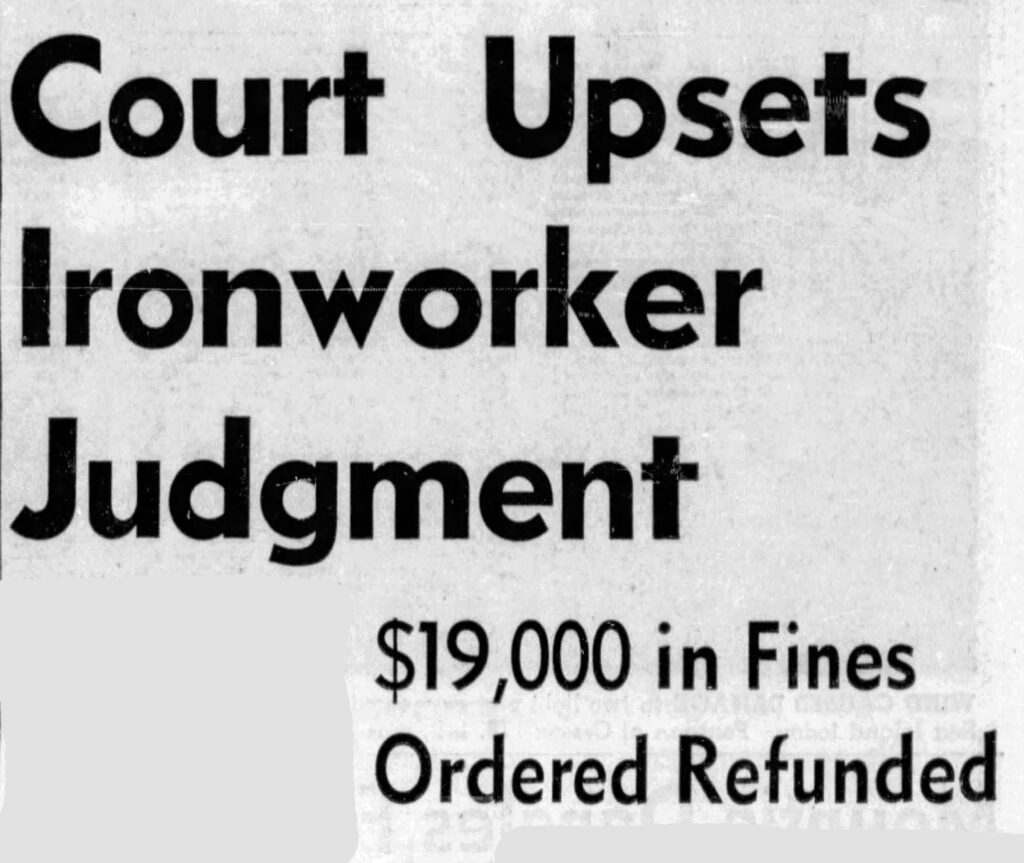 The BC Court of Appeal overturned all of Judge Manson’s contempt of court rulings, ordering every last cent of the $19,000 in fines be returned | Vancouver Sun, Nov 3 1959.

The union’s bitter legal tussle also ended happily. In a unanimous judgment, the BC Court of Appeal overturned all of Judge Manson’s contempt of court rulings, ordering every last cent of the $19,000 in fines be returned. The Appeal Court also made a point of telling Berger that Judge Manson had been wrong to criticize his objections and threaten him with contempt of court.

“Justice Manson was no hypocrite,” Berger wrote in his auto-biography. “He hated unions….There were no long-winded rationales for his judgments. He was out to get you, and he did.”

One more development awaited for Berger and the Ironworkers to savour. After Judge Manson’s vituperative performance on the bench, the provincial government made it mandatory for superior court judges to retire at the age of 75.

Note: I am indebted to Eric Jamieson and his excellent book, Tragedy at Second Narrows, for much of the narrative details in this account. (RM)