In November 1944 and again in 1945 — as the Second World War neared its end — two art exhibitions celebrating labour took place at the Vancouver Art Gallery. The first exhibition included 150 works; in 1945 there were over 200 entries.

The exhibitions’ working titles began as “Labor in Wartime” evolved to “People at Work” but the final choice of “British Columbia at Work” stuck. 1 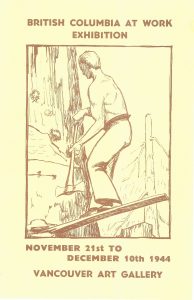 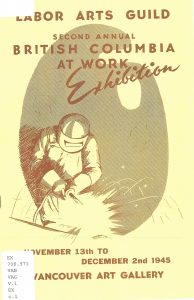 “British Columbia at Work” was mounted under the umbrella of the Allied Arts War Service Council and the Labor Arts Guild, an organization whose aims were “to mobilize and activize all artists, amateur and professional, who desire to identify their talents with the labor movement and progressive forces”. The sole criteria was to depict “some phase of economic activity…in which the connection of art and labour is featured”. 1

The Labor Arts Guild was co-founded in 1944 by John Goss, a musician and actor, and Julia Christianson, executive secretary of the Shipyard General Worker’s Federation. Both Goss and Christianson were active in the Labour Progressive Party, the political arm of Canadian communists. Read more about the cultural and political life of John Goss.

British Columbia’s industrial unions were large and powerful in the wartime economy. Shipyards employed over 30,000 unionized workers, many of them women who joined the workforce for the first time. Aircraft work, logging, mining and smelting jobs also attracted huge numbers of working men and women.

“British Columbia at Work” focused on the “industrial life of our Province…thereby stress[ing] the considerable and varied contribution made by our workers to the victory of Democracy over Fascism”, according to the 1945 exhibition guide. “This venture was unique in the history of Canadian art…and national recognition of this fact was recorded by the reproduction of the winning exhibits in the Wartime Information Board’s publication of “Wallnews” for March of this year.”  2 Watercolors, oils, sketches and sculptures depicted shipbuilding, canneries, agriculture and fishing. Both workers and industrial settings were included in the entries.

“British Columbia at Work” was supported by several BC unions, including the International Woodworkers of America (Local 1-71), the Shipyard General Workers’ Federation, and both Vancouver Labor Councils. Prize money was donated entirely by labour organizations, and four of the six winners in 1946 were members of unions.

Due to the war, the Vancouver Art Gallery had a skeleton staff of three employees, including the curator, and eagerly embraced the exhibit when it was proposed. The response from artists exceeded expectations.  The 1944 exhibit had 150 entries and spread across two galleries. In 1945 there were over 200 works on display. “British Columbia at Work” attracted many artists from the Vancouver School of Art (now Emily Carr University) who became  renowned names in the Canadian artistic community. They were artistic colleagues, and many went on to be lifelong friends.

Lawren Harris brought greetings from the Federation of Canadian Artists. Harris remarked “the painters have entered more fully into the life of the worker and into the drama and meaning of labor. It also amounts to a new movement in art in British Columbia.” 3 “The Shipyard Workers on Ferry” by Molly Lamb Bobak. Retrieved from artnet.com 2019-11.

“British Columbia at Work” purposefully embraced both professional and amateur artists. “Part of our task will be to dissipate the snobbery about the arts which has grown up in the past and from which labor naturally withdraws”, according to Goss. 4

Per Danielson, the 12-year old son of a commercial fisherman entered a pastel drawing of a fishing trawler. 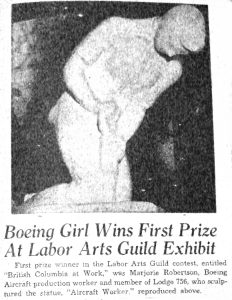 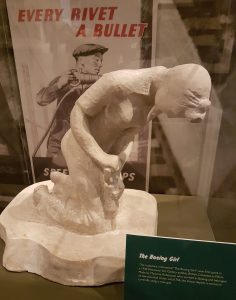 “Aircraft Worker” is now in the Museum of Vancouver’s permanent collection. 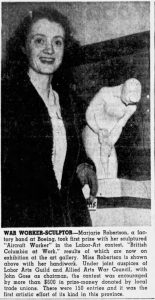 First prize in 1944 went to Marjorie Robertson, a member of Lodge 756 of the International Association of Machinists and a Boeing Aircraft production worker, for her sculpture “Aircraft Worker”. The sculpture is in the Museum of Vancouver’s permanent collection.

Fraser Wilson’s “Organization” depicting union organizing tactics in BC shipyards was part of the exhibit.

“End of Shift” a wood carving of a woman warworker by Lilias Farley won a $100 prize in 1945 and 15-year old Arnold Belkin’s oil painting “Workers on a Street Car” was named best oil painting.

The National Gallery of Canada in Ottawa declined to show the exhibit in 1945, replying to an offer from the Vancouver Gallery that “few of the artists are known to us”. 1

The new Boilermakers’ Union Hall on West Pender Street in Vancouver [which incidentally included “up-to-the-minute bowling alleys”] planned to host a special showing of “British Columbia at Work” for industrial workers in early 1945 .

From January to April 1946 a selection of the works toured the province, with exhibits held in Kamloops, Vernon, Kelowna, Nelson, Penticton, Trail, Kimberley, Creston, Alberni and Grand Forks where local artists were invited to participate.

Major Attraction in a Pioneering Field

Mainstream response to “British Columbia at Work” was effusive. “The vital nature of the subject matter and surprising number of talented artists, professional and amateur, contribute to a display which will undoubtedly rank among the general public as one of the Gallery’s major attractions of the year.” 5

The Machinists Union praised Marjorie Robertson’s win in 1944. “The $250 award came…at a very handy time for Miss Robertson, since it enables her to carry on an art course which would have otherwise been impossible.”

“The exhibit as a whole has received wide praise, not only for the quality of work submitted but also for its pioneering in a field which has so far been entirely neglected.” 6 Eight of the paintings from the 1944 exhibition were donated by Vancouver to its sister city Odessa as a “token of their high regard and profound admiration for a city and a people that have fought so valiantly in the cause of human freedom”. 7 It is unknown if the donation occurred, or if the paintings still exist. Ina Uhthoff’s “Girl Welder” is now in the collection of the Art Gallery of Greater Victoria, suggesting the donation did not come to fruition.

John Goss, Julia Christianson and the Labor Arts Guild were dedicated to connecting working people to the artistic world. In addition to the art exhibits they sponsored theatrical presentations such as Shakespeare’s Hamlet and well attended People’s Concerts featuring song,  dance, classical and popular music. Goss and Christianson left Vancouver soon after “British Columbia at Work”  finished in 1945. Their short but significant contribution to labour and the art world has been almost forgotten.

In 1982, the Vancouver Art Gallery curator attempted to locate some of the 350 pieces contained in the two exhibitions with limited success. Only a few are in public collections. Some were given to family members, sold privately or destroyed.

“British Columbia at Work” was an inspiration that merged art and trade unionism during a remarkable period in the province and its labour movement’s history. It is hard not to dream of the possibilities should a similar endeavour be undertaken today.

NOTE: For many years, the American spelling, labor, was predominant in the Canadian labour movement. We have used that spelling in the appropriate contexts.

We are grateful to the Vancouver Art Gallery Library and Archives for their assistance with research for this article.