Published by BC Labour Heritage Centre on July 11, 2022

Carpenters in Aprons, Metalworkers in Tin Hats and Morticians in Black 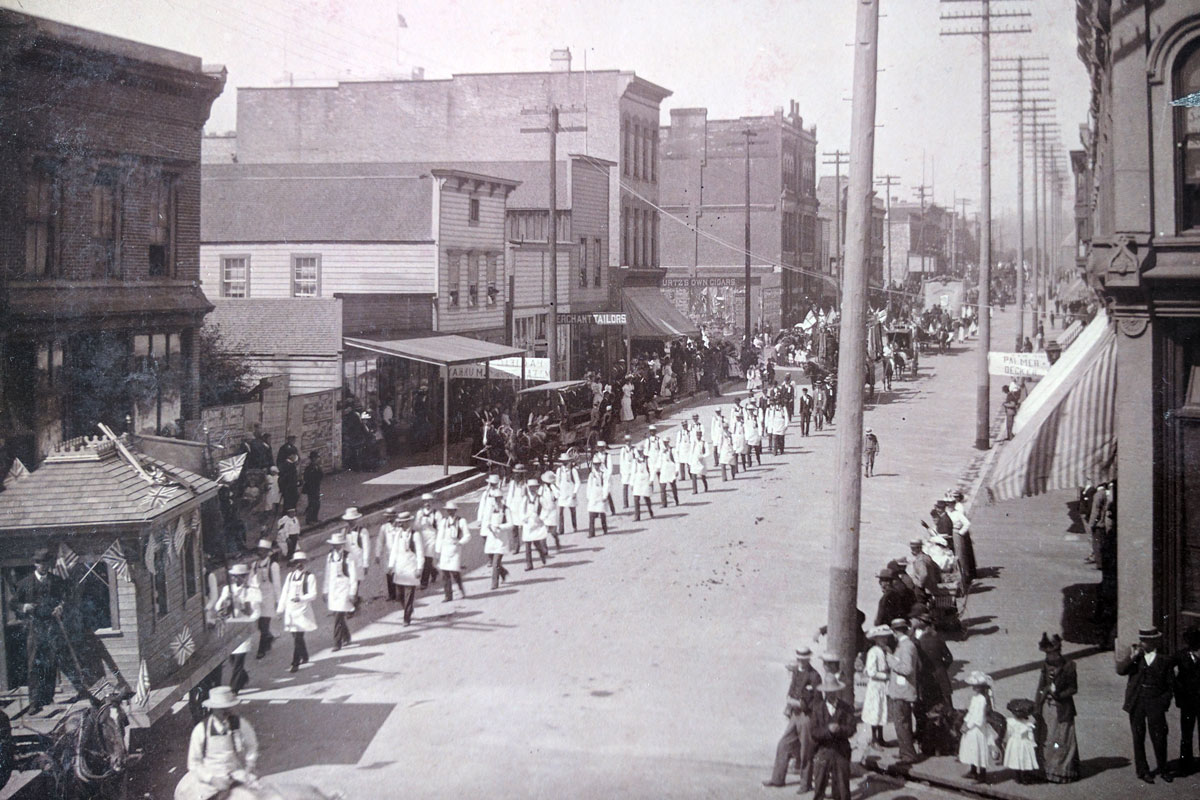 Parades – particularly Labour Day parades – were big attractions in the early years of British Columbia. While a venue for unionized workers to assert their place in society these parades excluded large segments of the community. Participants were mainly white men, for unions from 1890-1920 were active proponents of a “White Canada”.

Late BC historian Robert McDonald noted that for labouring men, just as important as their call for shorter hours, “fair” working conditions, and democracy was their insistence on Oriental exclusion, “an expression of the underlying racism that characterized settler colonialism in British Columbia”. 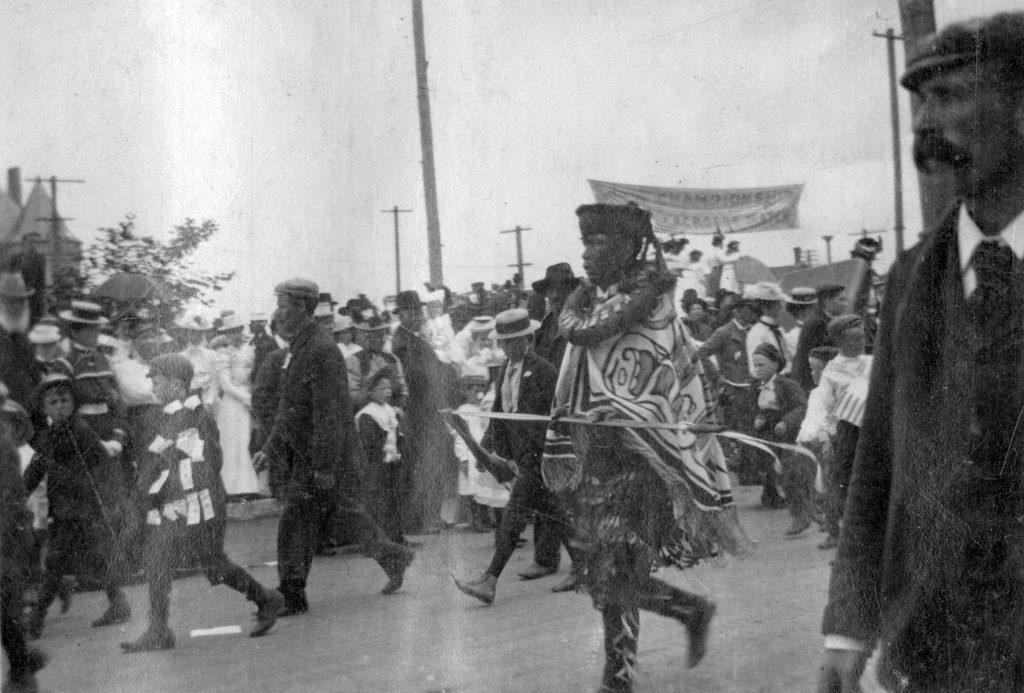 An indigenous man in the Labour Day parade in Vancouver 1900 was an unusual sight. | Vancouver Archives P120.1 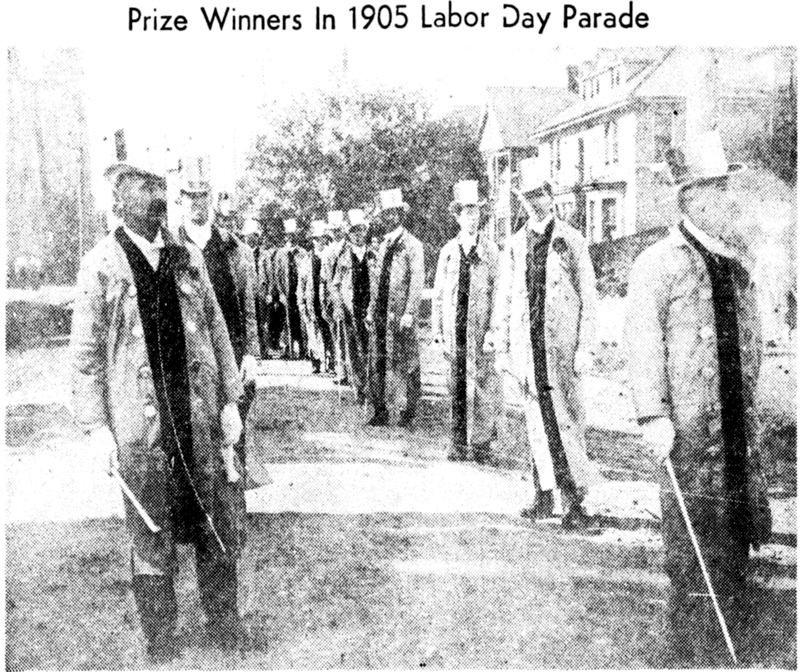 A Day to Remember on Granville Street

Equally vital to the union men [and it was almost entirely white males in the early days] was the trademark uniforms of those marching in the parades. Vancouver Sun Columnist Albert Foote observed that each trade tried to outdo the other in their attire. Morticians wore black, tailors carried yard sticks and machinists turned out in shiny black sateen shirts. Teamsters brought their horses and wagons. 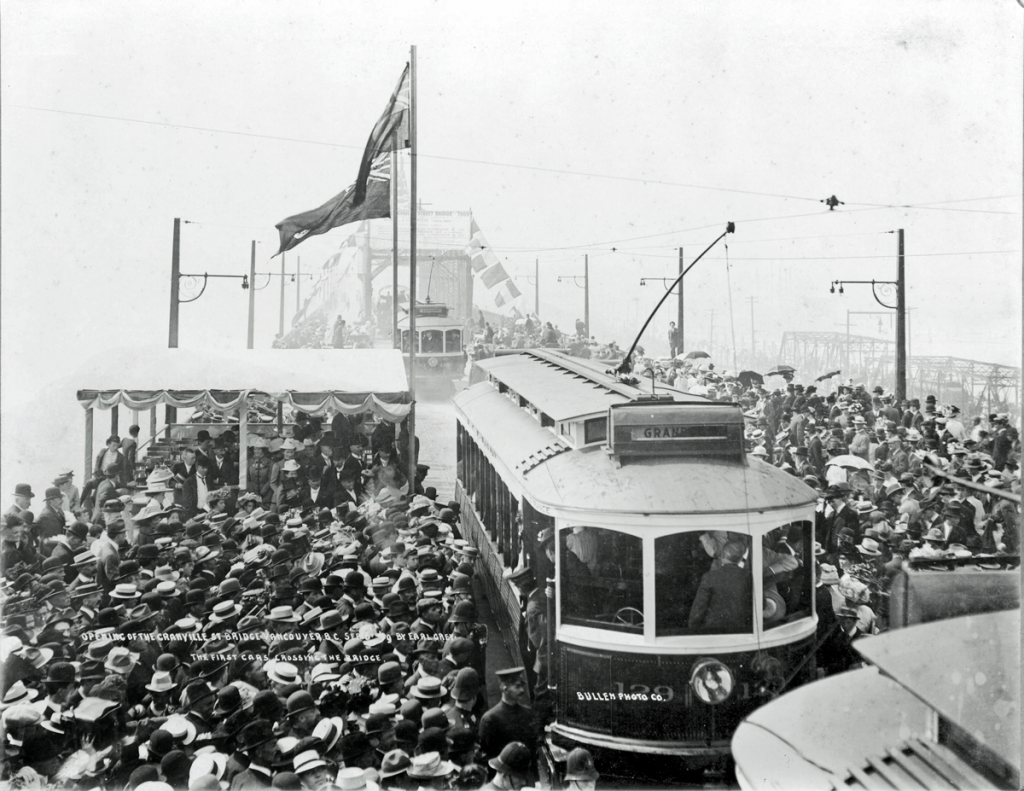 Vancouver’s Labour Day parade in 1909 celebrated the opening of the new Granville Street Bridge. Foote says it was a “day to remember”, but not due to the dignitaries who attended. Cartoonist Fraser Wilson (whose famous mural has its own history) captured the spectacle of two dogs fighting in the daily newspaper. 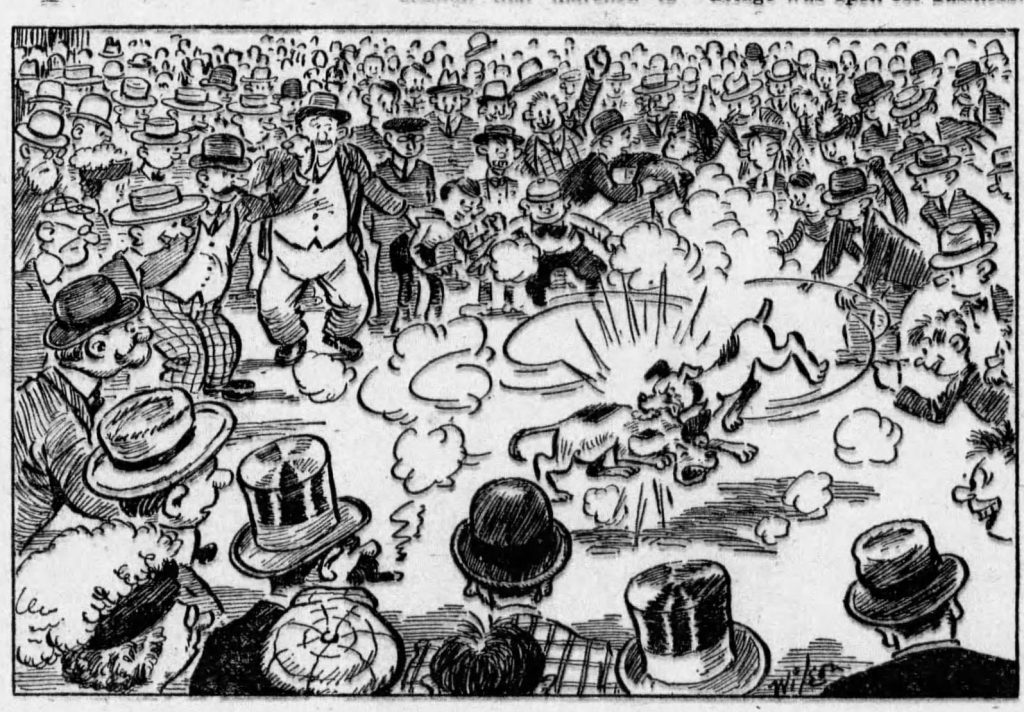 One Labor Day in North Vancouver devolved into a shouting mob of tradesmen debating “what kind of superior workman they were”, if one can believe the repartee of columnist Albert Foote writing in 1939.

“The entire membership of the barbers’ union ganged up on those helpless fellow members of the AF of L…One by one, these various tradesmen weakened…great husky boiler-makers, brawny blacksmiths were compelled to weaken and call for quarter, as the rising collective massed voices of the barbers rose above the general din.”

An affront to the labour movement!

While Labour Day parades began as a means for workers to “assert their respectability” they were also events that demonstrated age-old antagonism between unions and the ruling classes.

In 1914 the Vancouver Trades and Labour Council said it would not take part in the Labour Day parade because “the Exhibition Association has employed non-union labour”. 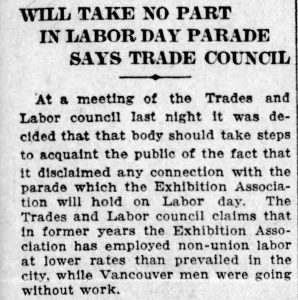 In 1954 there were two competing Labour Councils in Vancouver (one dominated by industrial unions and the other by craft unions), but the two groups united for the Labour Day parade. The International Woodworkers of America, BC’s largest union of the day, won the trophy for best float.

The following year (1955), the parade pact was gone. The Vancouver Labor Council (CCL) called off the parade entirely because City Council changed the route from Hastings to Powell Streets. This is “an affront to the labor movement” fumed Jack Guest of the Grainworkers Union. BC Federation of Labour Secretary George Home agreed, “we are taken as a minor group and we feel insulted”.

Labour Days Around BC 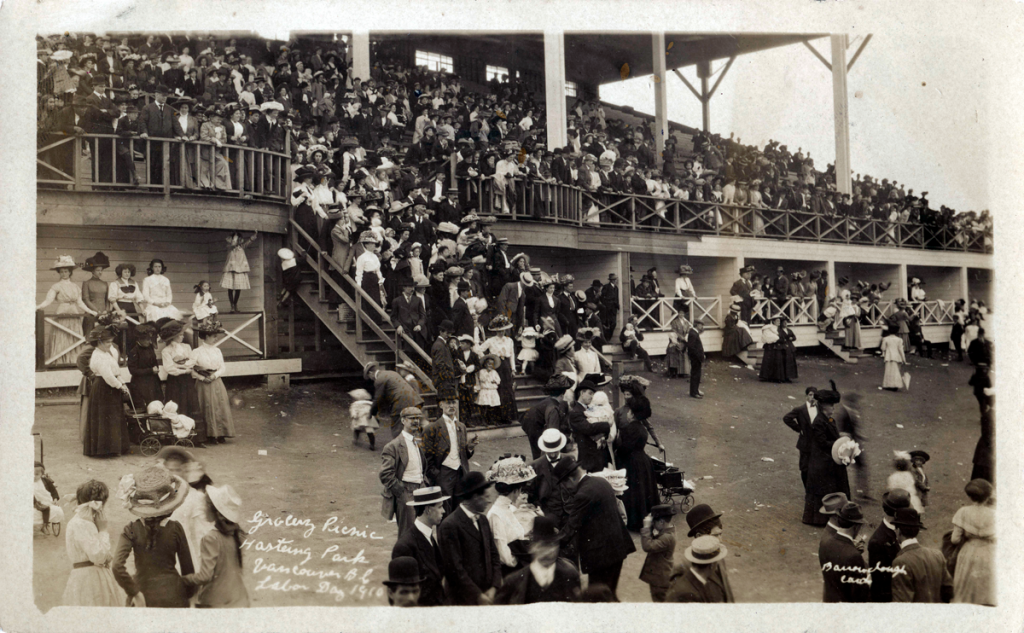 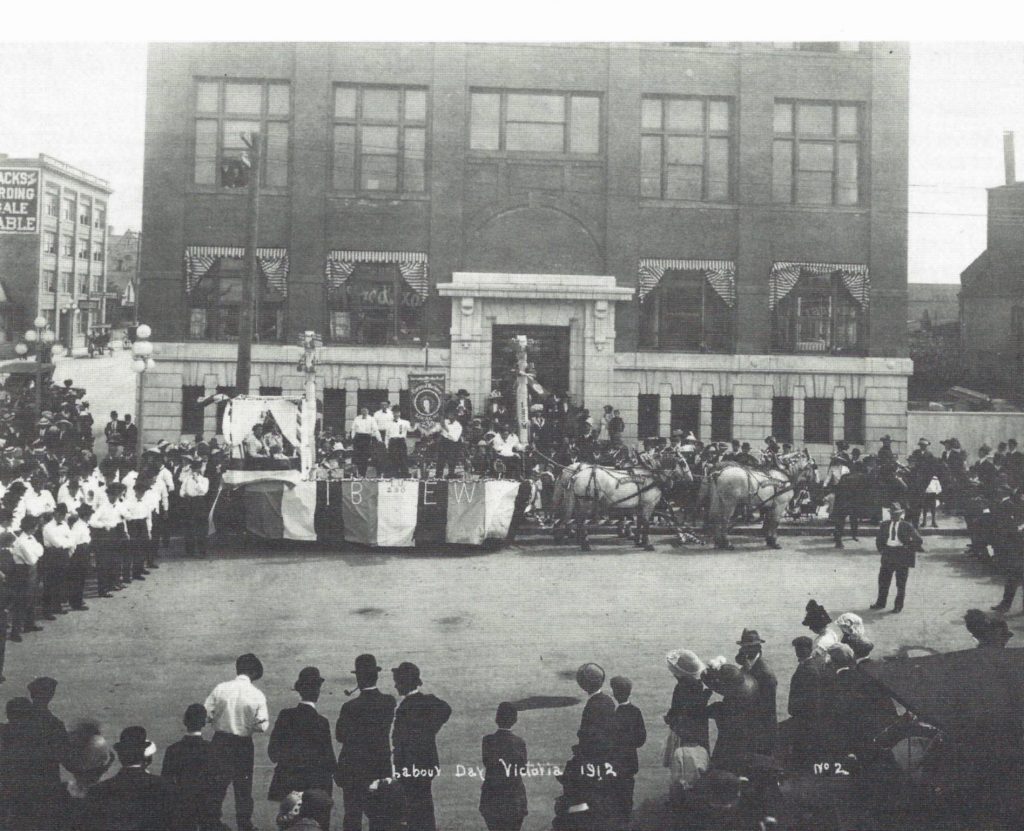 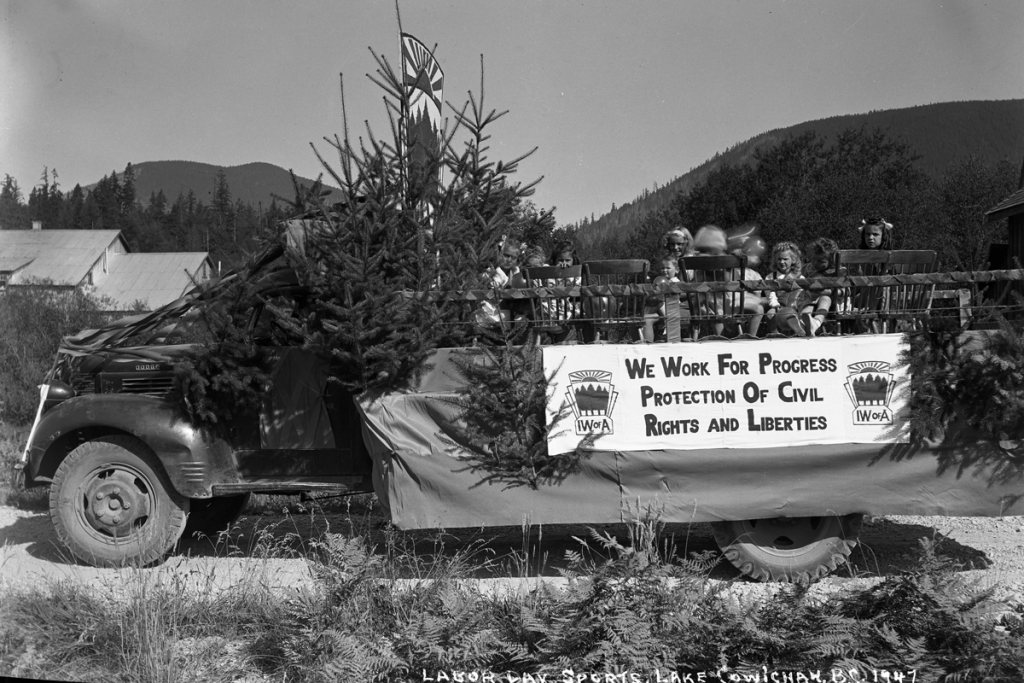 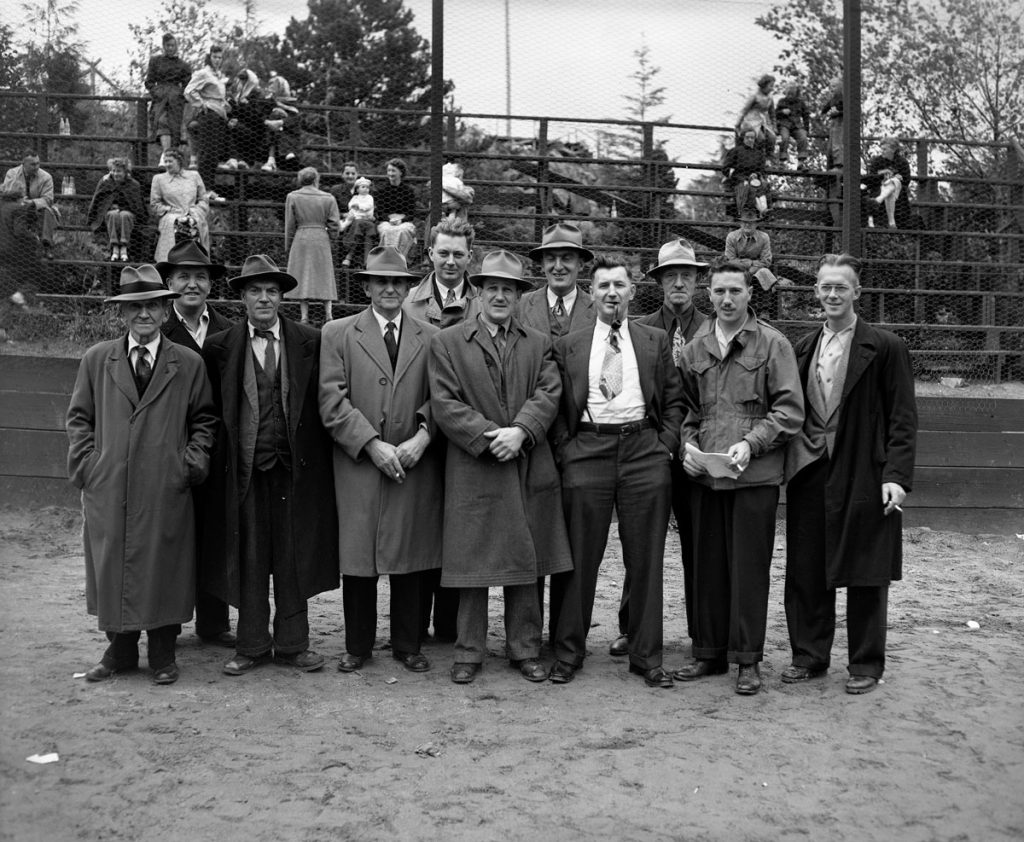 Over time, Labour Days began to feature sports for children, but also for loggers to demonstrate their skills. ABOVE: Labour Day Sports Committee Prince Rupert 1950 | Prince Rupert City and Archives 5138 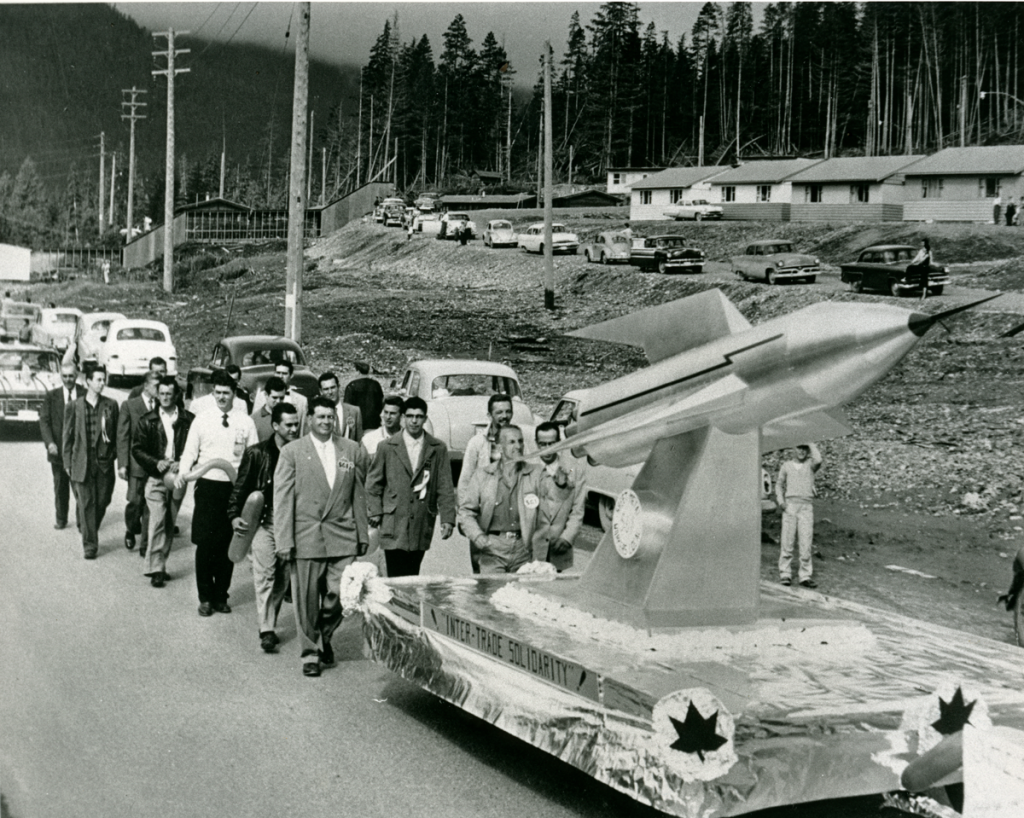