Historic Reversal of a Government “Betrayal”

On Aug. 30th 2021, the provincial government of BC under the New Democratic Party (BC NDP) announced that dietary and housekeeping workers in the healthcare industry would be brought back into the public domain after 20 years of privatization and “contracting-out”. The Hospital Employees’ Union (HEU) fought tirelessly for this change, most recently under the slogan “Make It Public”; to understand what an historic achievement this is, we must recognize its origin story.

Raj Chouhan, known primarily for his role as a co-founder of the Canadian Farmworkers’ Union and current political positions as an M.L.A. and Speaker of the House in the provincial legislature, worked as a Director with the Hospital Employees’ Union for over a decade. In an interview with the BC Labour Heritage Centre for our South Asian Canadian Labour History Project, he recalled a 1999 promise from Gordon Campbell and what he described as a “betrayal” following the election of the BC Liberal Provincial Government. It was this incident which motivated him to transition from the labour movement and community activism to provincial politics.

(Click CC in lower right-hand corner to turn on video captions)
As Chouhan describes, some of the first legislation passed by the new provincial government in 2002 targeted public sector workers: Bills 27, 28 and 29. Bill 29 meant that hospitals were free to contract out and privatize thousands of hospital employee jobs, stripping those protections from the HEU collective agreement. 80% of these jobs were held by women (Chouhan estimates closer to 90%), many of them South Asian Canadians, older workers or new immigrants. Almost overnight, hospitals in Vancouver and the Fraser Valley took advantage of the new legislation to sign long-term contracts with multinational corporations.

When the Gordon Campbell government broke its pre-election promise and unilaterally stripped contracting-out protection from the HEU in 2002, thousands of workers lost their union jobs. Most were women of colour. HEU photo.

Laundry, dietary and housekeeping workers, who had been earning $18 an hour, found themselves jobless; if they wanted to keep working, they had to reapply for their old jobs, now non-union, at a measly $10/hour with no guarantees they would be hired. Simultaneously, the provincial government began rapidly closing long-term care facilities. Over time, an estimated 8000 HEU members were bumped from their jobs by private non-union contractors. This was the most extensive privatization of health services in Canadian history and the largest mass job loss for women in British Columbia since the end of World War Two.

The HEU fought back, organizing protests, short-term occupations, pickets and rallies. Secretary-business manager Chris Allnutt, president Fred Muzin and financial secretary Mary LaPlante were arrested for taking part in a union blockage that put bales of hay across the road at a Chilliwack industrial park where trucks full of dirty hospital laundry were set to roll out to Calgary. Given a 10-year private contract to provide clean laundry for four Fraser Valley hospitals with no local facility, K-Bro Linen Systems trucked millions of tons of laundry hundreds of kilometers to Calgary and back, taking 43 local union jobs with them. LaPlante recalled this incident in an oral history interview with the BCLHC in 2019.

(Click CC in lower right-hand corner to turn on video captions)
At the bargaining table, HEU attempted to stop the bleeding by agreeing to wage rollbacks, but demanding better security, bumping rights and severance pay. When the employers responded with even more concessions, the anger of union members boiled over. A massive 89% vote in favour of striking led to picket lines at hospitals across the province on April 25th, 2004. Three days later, the government brought in back-to-work legislation. Passed at 6 a.m., Bill 37 imposed a two-year contract on the hospital workers and ordered an end to the strike. The HEU instructed members to maintain their picket lines. 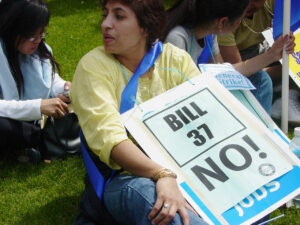 HEU members resisted the back-to-work orders and contract imposed by Bill 37 in April of 2004. HEU photo.

For four days, members of the HEU defied back-to-work orders and a harsh contract, with escalating support from the trade union movement. Thousands of Canadian Union of Public Employee (CUPE) members walked out, shutting down municipal, school and library services across the province. Some sawmills, a pulp mill, a power generating plant and scattered transit services also struck. Other unions threatened to join in an escalating solidarity action. “The government stepped over the line, and it’s time we stand up for what we believe in”, said Vancouver garbage collector Doug McNicol. That Saturday was also May Day (May 1st). The confrontation produced one of the largest, most spirited “International Workers’ Day” rallies in years. 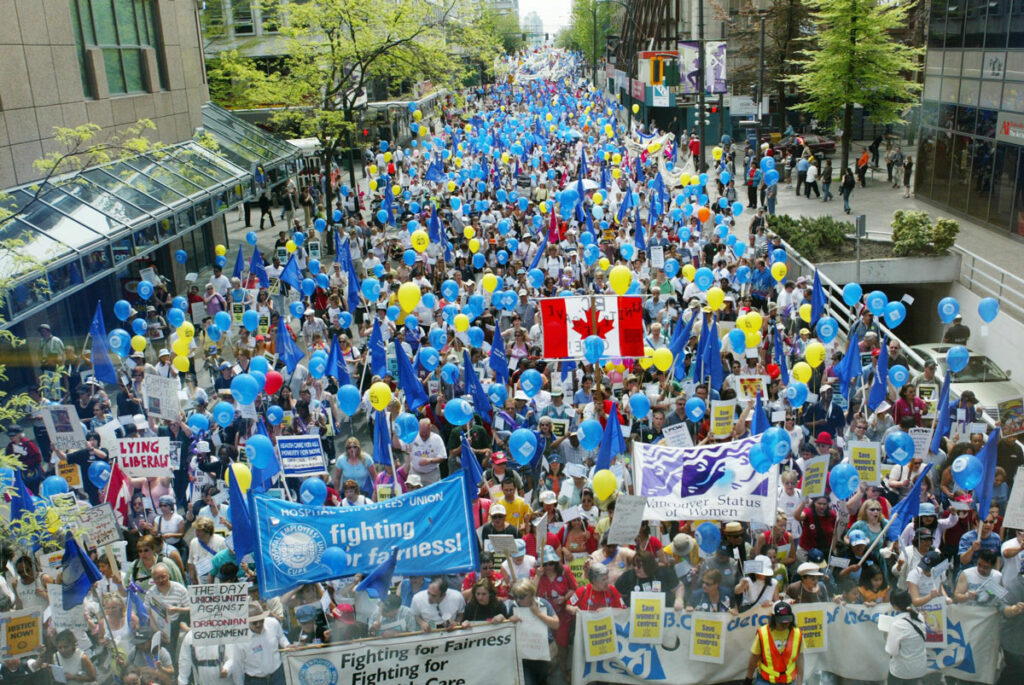 The back-to-work legislation imposed on the HEU prompted threats of a general strike and the largest May Day march in Vancouver in years. Kim Stallknecht photo, Province Newspaper.

Shortly before midnight that Sunday, just hours before a wealth of solidarity walkouts were to take place, HEU’s Allnut and BC Federation of Labour president Jim Sinclair announced the union had a deal, though not the one they hoped for. Looking at the uncertainty of an all-out illegal strike, the HEU agreed to the government’s cap of 600 layoffs over the next 2 years and a severance fund for those let go. Six weeks later, the Supreme Court fined the HEU $150 000 for contempt of court in defying the back-to-work order. It was the largest fine imposed on a union in BC history at the time. In the years following, the union set about organizing the thousands of non-union workers brought in by corporations. Within a decade, the HEU represented most employees working for the “big four” corporations, with successful rounds of negotiations raising wages to $16/hour. Unfortunately, many workers never recovered from the initial job loss. Employers would often end their contract once workers unionized, making organizing difficult, but the union persevered.

On June 8, 2007, nearly five and a half years since Bill 29 introduced, the HEU won the sweetest payback of all. The Health Union’s constitutional challenge to the legislation had quietly made it to the Supreme Court of Canada. When the ruling was handed down, the Supreme Court struck down parts of the bill as a violation of the Canadian Charter of Rights and Freedoms, agreeing by a 6-1 majority that removing protection against contracting out, bumping rights and layoff notices contravened the Charter’s guarantee of freedom of association. For the first time, Canada’s highest court enshrined collective bargaining as a constitutional right; no longer would governments be able to impose a contract without first trying to reach a settlement through meaningful bargaining. The BC Federation of Labour proclaimed June 8th as Collective Bargaining Rights Day in British Columbia.

“I can tell you, my phone, my email, people coming into the building… they are jubilant,” Judy Darcy, HEU Secretary-Business manager of the time, told reporters. “They jump for joy, they cry, they shriek… They have been through absolute hell.” The Supreme Court provided the government a year to set things right with the union.

Now, with this historic reversal nearly 20 years after the initial “betrayal”, dietary and housekeeping workers are back under the public domain with their fellow healthcare workers. 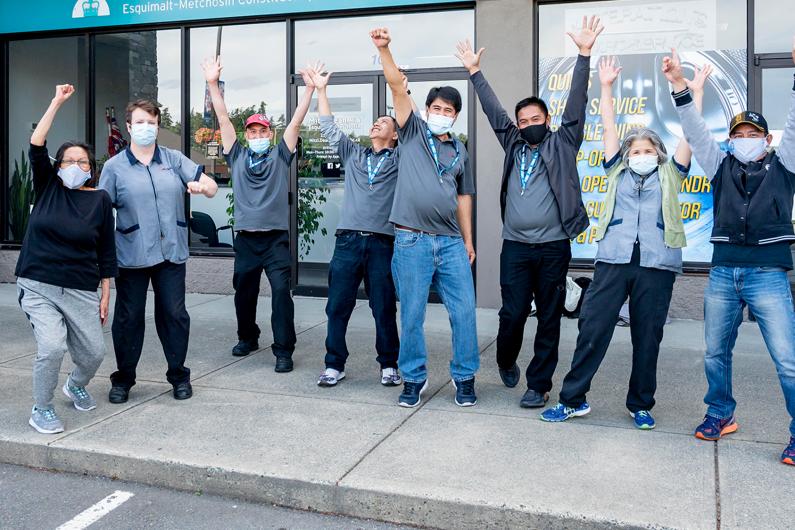 HEU members celebrate the reversal of privatization of cleaning and dietary work in BC hospitals, Aug. 30, 2021. HEU photo.