In this 1.5 hr conversation, Rod Mickleburgh and Donna Sacuta interview Joy Thorkelson. Joy is a resident of Prince Rupert and held positions as organizer and president of the UFAWU (United Fishermen and Allied Workers Union). Joy describes how she came to Prince Rupert, some of what she experienced as a shoreworker doing multiple types of jobs in the canneries and her evolution as a labour activist. Throughout, her love of the fishing industry comes through clearly as she recounts wonderful experiences with her strong women co-workers, and the work she took on because of her desire to improve the lot of the working -class. She discusses how she came to be a union organizer and what it was like to work for the union through multiple strikes, providing insight into how the work was done and how she dealt with the inevitable conflicts resulting from the struggle for worker equity, as well as commenting on some of the labour organizers, such as Homer Stevens, she has had the privilege to know. She also discusses how much labour power has been lost in recent years due to political re-structuring of the fishing industry. Toward the end of the interview, Joy talks about her motivation to run for City Council and the work she did while in office.

In a follow-up interview, Joy Thorkelson, President of the United Fishermen and Allied Workers Union, speaks to Rod Mickelburgh and Donna Sacuta as she continues to recall the issues and actions taken by West Coast unions in the fishing industry. She begins by discussing the many devastating impacts of the Mifflin Plan on the fishing industry and on the unions that had long-dominated the industry, as the numbers of fishers and boats steadily decrease and processing jobs have almost disappeared. Joy also recalls the impact Mike Darnell had as an organizer in Prince Rupert, and answers questions about the impact of the Communist Party on organizing in both the fish unions and other left-wing unions. Through this section she also recalls the vibrancy of the large and lengthy annual conventions, as well as the impact of the newspapers The Pacific Tribune and The Fisherman on communications and building solidarity amongst union members. Rod asks about issues of safety and health and Joy responds with a lengthy description of the types of risks the industry faces and some of the measures taken to improve what is intrinsically a dangerous job. At the end of the interview, Joy talks about the current state of union organizing in the fishing industry and recalls some of the powerful moments and experiences she has had along the way. 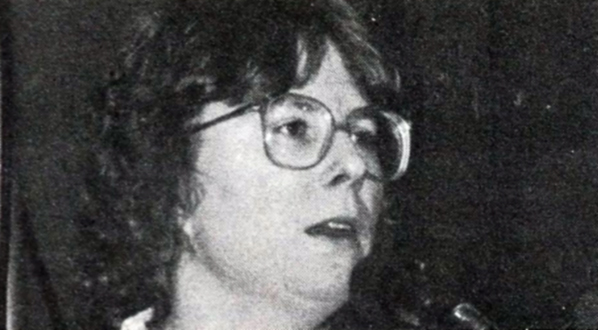 Joy Thorkelson speaking at BC Federation of Labour convention. Courtesy The Fisherman, December 17, 1990.