“So Vividly, I remember” 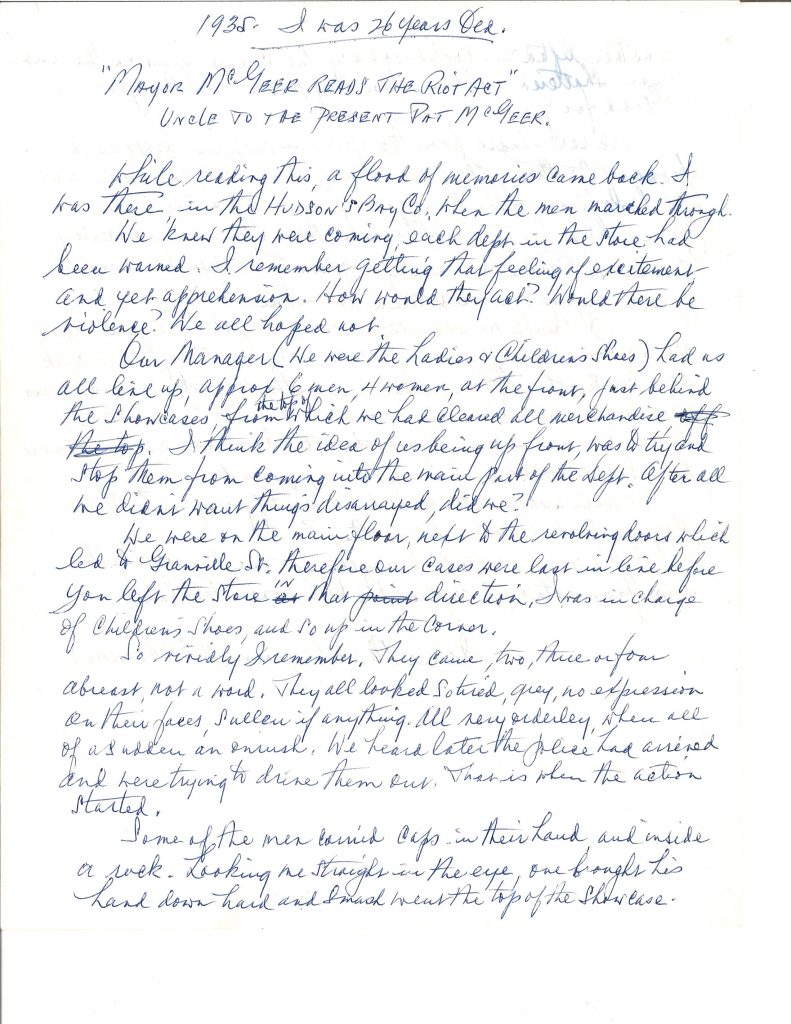 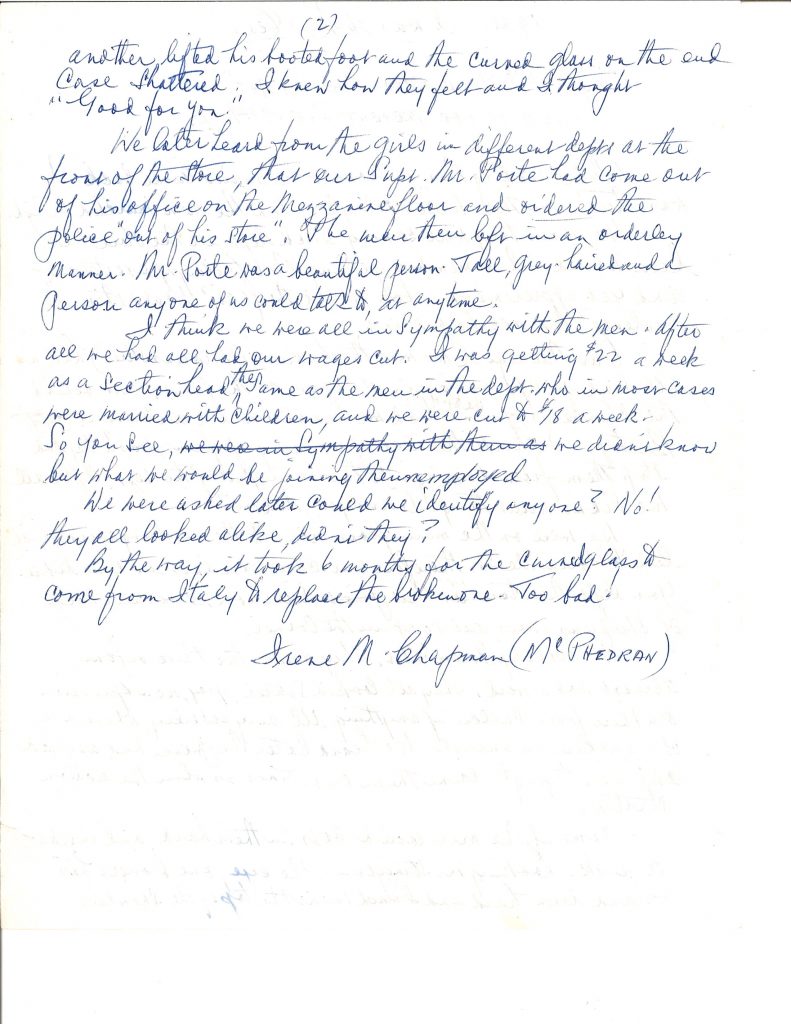 In April 1935 thousands of single unemployed men organized by the Relief Camp Workers’ Union went on strike to demand “Work and Wages” as the Depression wore away at the country. “Hunger marches, demonstrations, tin-canning, large public rallies and boisterous snake dances through downtown streets became as familiar to Vancouverites as the North Shore Mountains”, writes Rod Mickleburgh in On the Line: A History of the British Columbia Labour Movement.

An impromptu snake dance through the Hudson’s Bay store in downtown Vancouver on April 23, 1935 resulted in Mayor Gerry McGeer reading the Riot Act at Victory Square. This handwritten account of the events on April 23, 1935 was found in the BC Labour Heritage Centre’s archive files. Irene Chapman’s recollection as a clerk at the Hudson’s Bay shows the widespread public support of the Relief Camp strikers in Vancouver.  Her description of the strikers is poignant.  She explains how the store manager placed the blame for property damage on the police who he ordered “out of his store”.

Uncle to the present Pat McGeer

While reading this, a flood of memories came back.  I was there, in the Hudson’s Bay Co., when the men marched through.

We knew they were coming, each dept in the store had been warned.  I remember getting that feeling of excitement and yet apprehension.  How would they act? Would there be violence? We all hoped not.

Our Manager (We were the Ladies & Childrens Shoes) had us all line up, approx 6 men, 4 women, at the front, just behind the Showcases from the top of which we had cleared all merchandise off the top.  I think the idea of us being up front, was to try and stop them from coming into the main part of the Dept.  After all we didn’t want things disarrayed, did we?

We were on the main floor, next to the revolving doors which led to Granville St. therefore our cases were last in line before you left the store in that direction.  I was in charge of Childrens Shoes, and so up in the corner.

So vividly, I remember.  They came, two, three or four abreast, not a word.  They all looked so tired, grey, no expression on their faces, sullen if anything.  All very orderly, when all of a sudden an onrush.  We heard later the police had arrived and were trying to drive them out.  That is when the action started.

Some of the men carried caps in their hand, and inside a rock.  Looking me straight in the eye, one brought his hand down hard and smash went the top of the showcase. Another lifted his booted foot and the curved glass on the end case shattered.  I knew how they felt and I thought “Good for you”.

We later heard from the girls in different depts at the front of the store, that our Supt. Mr. Porte had come out of his office on the Mezzanine floor and ordered the police “out of his store”. The men then left in an orderly manner.  Mr. Porte was a beautiful person.  Tall, Grey-haired and a person anyone of us could talk to, at anytime.

I think we were all in sympathy with the men.  After all we had all had our wages cut.  I was getting $22 a week as a section head, the same as the men in the dept who in most cases were married with children, and we were cut to $18 a week.

So you see, we were in sympathy with them as we didn’t know but what we would be joining the unemployed.

We were asked later could we identify anyone? No! they all looked alike, didn’t they?

By the way, it took 6 months for the curved glass to come from Italy to replace the broken one.  Too bad!