The Battle of Kelly’s Cut 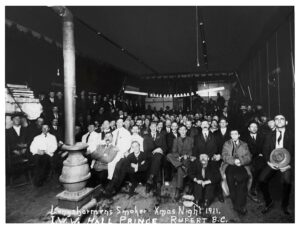 Prince Rupert longshoremen enjoy their “Xmas Night Smoker” at the IWW Hall in 1911. The IWW was a powerful presence in the northern coastal community. ILWU 505 photo.

The Industrial Workers of the World, otherwise known as the IWW or the Wobblies, were the most radical labour organization North America has ever seen. They weren’t interested in reforming capitalism. They wanted to wipe it out completely, putting an end to what they called “Wage Slavery”, and they believed in organizing by industry, not by trades like the craft unions.

In the early 20th century, Prince Rupert, perhaps because of its out-of-the-way location, or perhaps because of the nature of its workers, was an IWW hotbed. They were strong on the docks, among railway construction workers, and among city work crews.

Trouble erupted in the spring of 1911, when private contractors engaged by the city to do roadwork refused to pay their labourers the 45 cents per hour the city had agreed to for their own crews. The IWW, through the Prince Rupert Industrial Association, called its several hundred construction members out on strike. When the contractors imported strike-breakers from Vancouver, they were met at the dock by the strikers and persuaded to join the strike: “Strike on! Don’t be a scab!”. These prospective scabs often threw in their lot with the strikers, much to the frustration of employers.

Finally, contractors McInnis and Kelly did manage to hire a scab work crew which began work on April 6th, at a place often known as “Kelly’s Cut” on 1st Avenue between 6th and 9th Street. They were on the cut below, while the angry strikers marched up in defiance, on a 40-foot cliff on either side of the cut. Police and special citizen constables were there too, keeping a close eye on strikers. Someone hurled a rock down at the scabs, a shot rang out (both sides denied accountability), and the famous Battle of Kelly’s Cut was on. 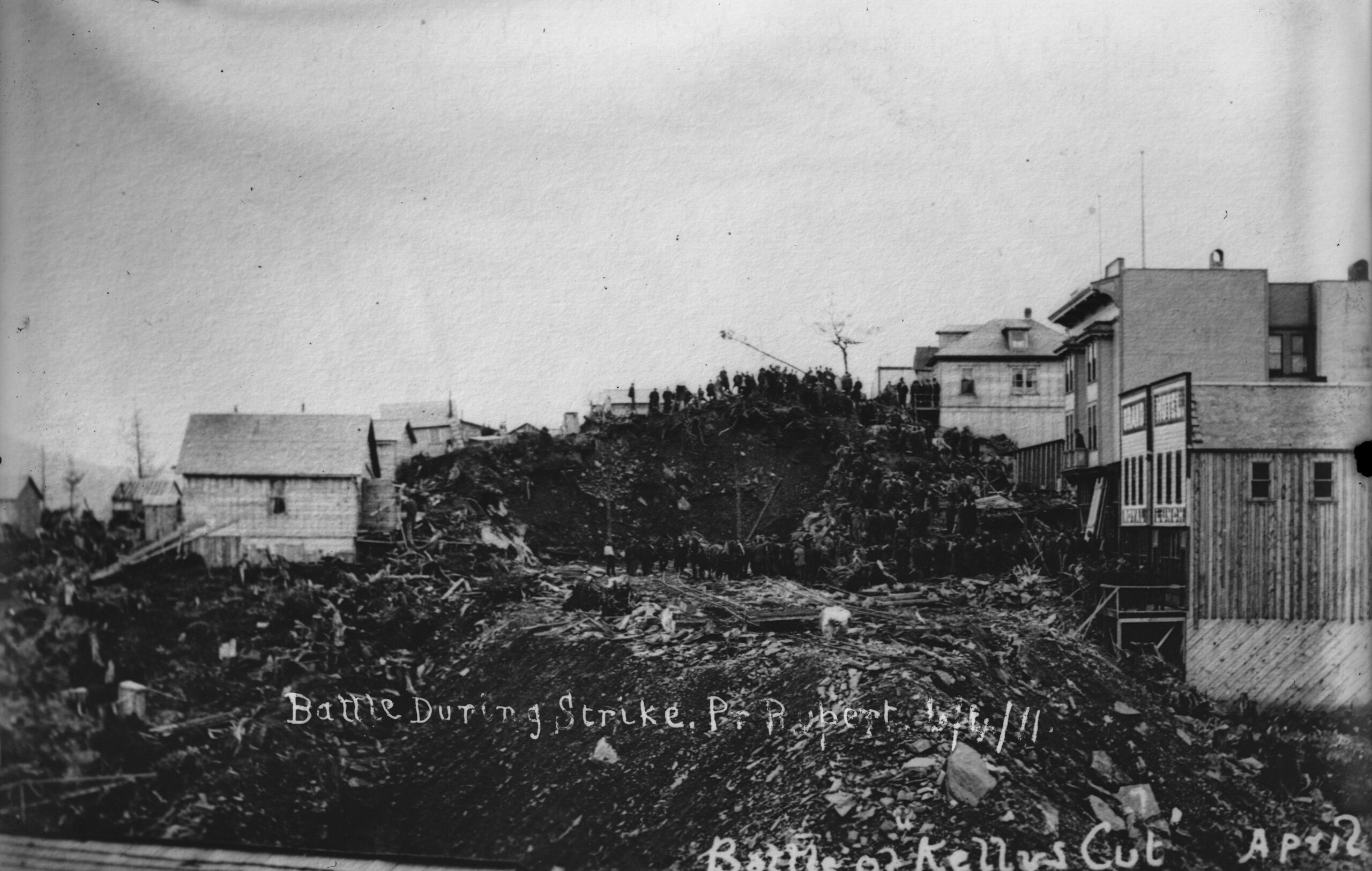 It was a fierce battle indeed, as the two sides went at each other on the top of the cliff, with rocks, clubs and bullets the weapons of choice. The melee raged back and forth, bloodying combatants on both sides, until finally, the forces of law and order got the upper hand as more and more “citizen cops” joined the fray, being sworn in as special constables to control the chaos – which allowed them to carry guns into the battle.

The Prince Rupert Optimist reported the next morning:

“500 men made fierce attack, on labourers in First Avenue cut with rocks and guns. Were pluckily fought off by a handful of police – Three strikers shot down and one of the victims may die. It seemed for a minute the mass of the mob would force the police and citizens over the edge of the cut … Sergeant Phiilipson was battling for his very life … On the crest of the high bluff a dozen fierce battles were raging at once … There was bloodshed. Revolvers were emptied more than once or twice, and one striker was shot through the body. Many of the policemen were struck by missiles. Bleeding hands and faces were seen amongst the citizens who rushed to the aid of the force.

By the time the tumult and the shouting died down, two policemen were injured, along with an engineer and two contractors. 50 strikers were arrested and 3 had been shot. The Mayor ordered all saloons to close and the doors to the Union Hall to be nailed shut. The city jail was far too small to hold all those arrested, so members of the local Carpenters’ Union were asked to construct a quick “temporary jail”. After some debate, they agreed. At least, said a Wobbly wit, their jail was a union job.

Thirteen strikers were eventually dispatched to Victoria to stand trial on charges ranging from attempted murder to intimidation. The leaders, named as Morse, MacDonald, and King, were charged with “counseling, attempt to kill.” One got 3 years, five got 2 years, three 1 year, and one 6 months. The others were acquitted.

The IWW took issue. In a printed document, the union blamed two men: George Leek, a local businessman, who later received a Victoria Cross from King George; and Bill Lynch, another business owner, who the document proclaimed fired the first shot. A Mr. John J. Sloan of Sloan & Co. Clothing Store, per the union, allegedly went into the Union Hall and physically dragged one of the workers out. The Wobblies issued their own list of guilty parties:

Although the strike was lost, the legend of the battle lives on – commemorated by a worker’s poem written by union radical George Casey, who eventually became a perennial member of city council. Casey took the case of the 50 arrested men to the BC Federation of Labor Convention in 1912 in Victoria and then to the federal government. He claimed all were “liberated” due to his efforts. His poem about the incident remains a timeless tribute to working people. 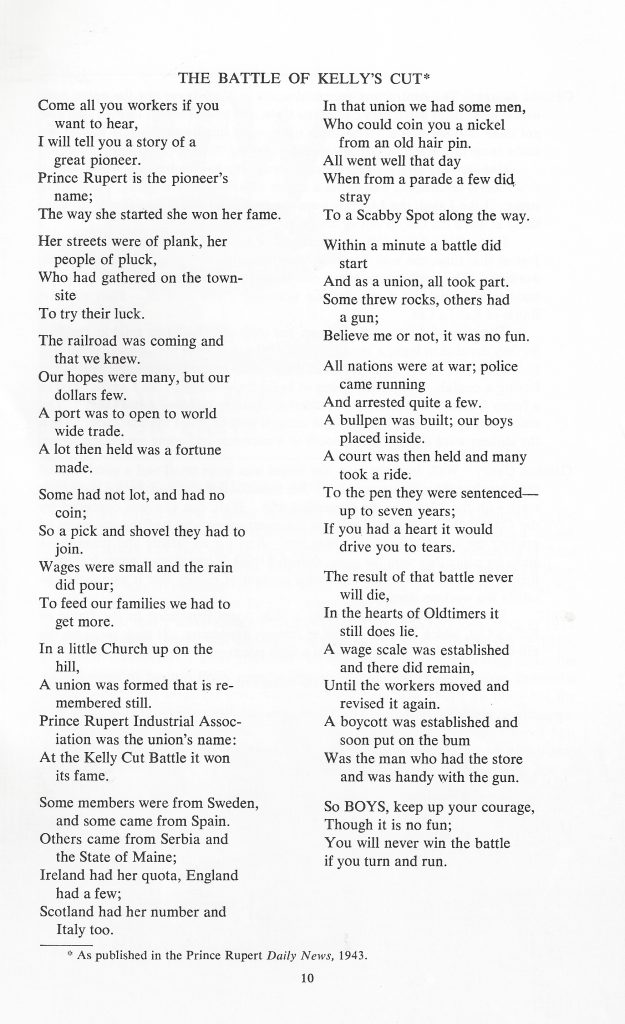 Learn more about Prince Rupert’s radical labour history through our BC Labour History Walking Tour App, available to download for free on Google Play and the App Store.