This Day in History: Sept. 22, 1980, the TWU Struggle Against the BC Telephone Company Begins

The 1980s kicked off in British Columbia with an inspiring example of workers using new tactics to cope with an aggressively anti-union employer. The BC Telephone Company was US-owned and had put the Telecommunications Workers Union (TWU) through a difficult 3-month lockout in 1977-78. When a new round of talks began in 1980, the union launched into action on September 22, 1980 to get ahead of another lockout; 530 craft employees – switchboard repairs, wiring and installation specialists – began a work refusal of all but essential repairs. The TWU strategically targeted these money-making areas while keeping the majority of members working, contributing $3 per week to provide these craft workers with 70% of their regular pay. In the meantime, craft members kept busy with parking lot volleyball, cards, chess and checkers.

As repair and installation orders began to pile up, BC Tel sent supervisors to do the work; TWU responded with mobile pickets, following the supervisors wherever they went. 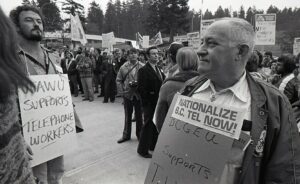 B.C. Federation of Labour convention delegates stage rally at B.C. Tel headquarters in Burnaby to protest the company’s labour relations record and to demand that the provincial government nationalize the telephone company and operate it as a public utility. Nov. 26, 1980. Pacific Tribune photo MSC160-572_04.

Once TWU picketers showed up at a construction site, members of the Building Trades unions would walk off the job in solidarity. The company began punishing workers for supporting the strike, temporarily sending home 1000 employees for wearing buttons that said “Crown Corporation Now!”. Workers were often suspended for “low productivity”. By January 1981, the TWU had more than 1000 members on permanent suspension and could foresee another lockout on the horizon.

Then someone made a bold suggestion: what if they just refused to leave?

The office occupation began in Nanaimo, Feb. 3, 1981: after 21 maintenance workers were suspended for “going slow”, employees began to gather in the main lunchroom and organically organize a takeover of the building. Shop stewards wrote up shift schedules so that workers would control the switchboards 24/7; the evening shift arrived with sleeping bags and provisions. A banner was raised proclaiming BC Tel was “UNDER NEW MANAGEMENT”. Suspended switchman Alf McGuire told the media: “When ordinary people get desperate enough to take over a building, things are getting pretty desperate.” 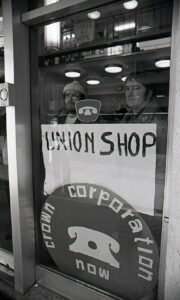 This spark soon turned into a flame. Two days later, on February 5th, Burnaby shop steward Lila Wing was told to leave and change her anti-company T-shirt before returning to work. She called the TWU for advice and was given the green light to take over the building. Similar instructions were given to members at 14 company exchanges throughout BC. Soon, switchboard operators were answering information calls with “BC Tel, under workers’ control”. “Solidarity Forever” blared through the line when callers were placed on hold.

The BC Federation of Labour joined the fray, with the usually soft-spoken President Jim Kinnaird delivering a fiery public speech declaring “industrial relations war” on the employers of BC. “Tonight I am telling you, we are going back, back to the old, bare-knuckled ways of fighting labour disputes.” Kinnaird declared in his Scottish brogue. “The gloves are off!” He announced a series of regional general strikes to begin within a week. With the Supreme Court finding TWU guilty of criminal contempt for ignoring an injunction against them, they ordered all members to begin a full-scale strike.

The last building to end their occupation and empty out into the street was the company’s 12-story tower in downtown Vancouver. At noon the next day, after 5 days of worker control, hundreds of members marched out into a jubilant crowd of construction workers and other supporters, a union bagpiper leading the way. Although the first workers’ occupation of its kind in BC was over, morale among the strikers was at an all-time high.

With private pressure from worried employers and public pressure in support of the strikers, BC Tel was forced back to negotiations and reached a tentative deal with the union on March 2 – but refused to take back 24 workers who had been fired during the strike. The TWU wasn’t going to accept this.

The one-day regional general strikes planned by the BC Fed were back on. Nanaimo, home to the original BC Tel occupation, was chosen as the first location. On March 6, 1981, a makeshift sign was posted at the entrance to the city reading: NANAIMO CLOSED. It truly was – nearly every union workplace was shut tight for 24 hours. Ferries, sawmills, supermarkets, liquor stores, buses, construction sites, government offices, the post office, and the docks all came to a stop in a stunning show of solidarity. Even the unaffiliated PPWC put aside their differences with the BC Federation of Labour to walk out of the large Harmac pulp mill, declaring they were with the TWU “one hundred percent”. The next strike was planned for Kamloops.

With employers around the province terrified, they privately pushed BC Tel to settle the dispute once and for all. Fifteen months after their contract had expired, following a 5-day occupation and 6-week strike, the TWU voted to ratify their new agreement. Every single worker returned to their previous job in triumph, buoyed by the support they had experienced from the labour movement at large.