With high unemployment and a recession in full swing, the Asiatic Exclusion League (AEL) was formed by the Vancouver Trades and Labour Council in August 1907, with the aim of “keeping Oriental immigrants out of British Columbia”. It is a sad and troubling part of BC’s labour history. 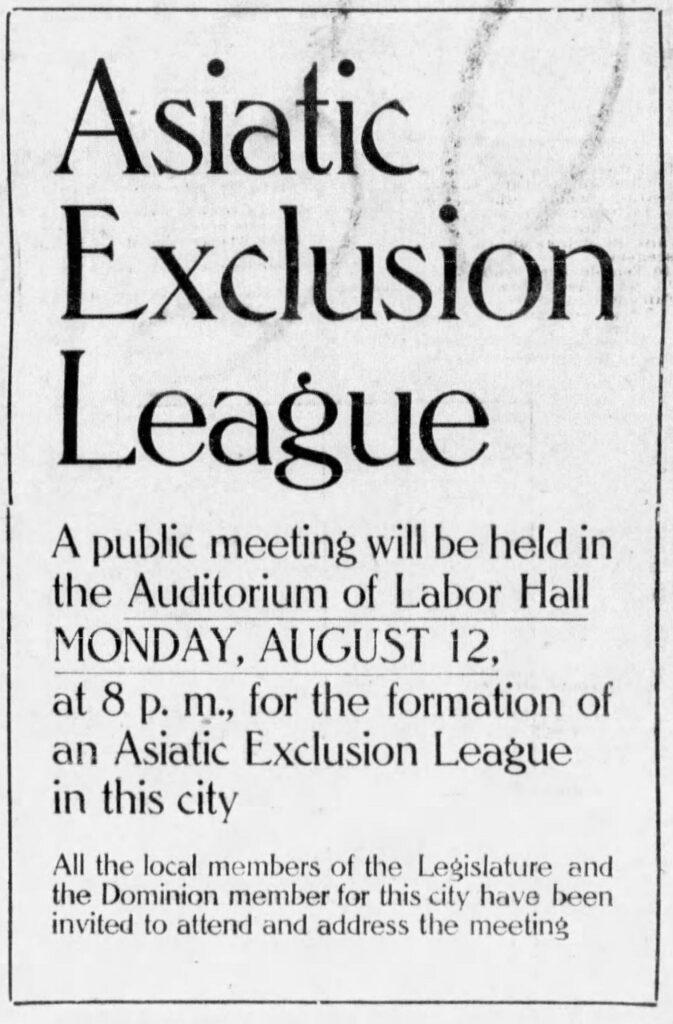 Advertisement in The Province, August 10, 1907 to organize an Asiatic Exclusion League in Vancouver.

Unfortunately, this type of racist labour organization was not a new idea in BC. In Victoria in the late 1870s, the low wage competition prompted unrest and discussion among many workers with the result that on September 1, 1878, a general union called the Workingman’s Protective Association was formed in the province’s capital.

At its formation in August 1907, the Vancouver Asiatic Exclusion League determined it would organize a parade and rally in the City, and set to work. It set its sights on expelling all ‘Orientals’ including Japanese, Chinese and South Asians. 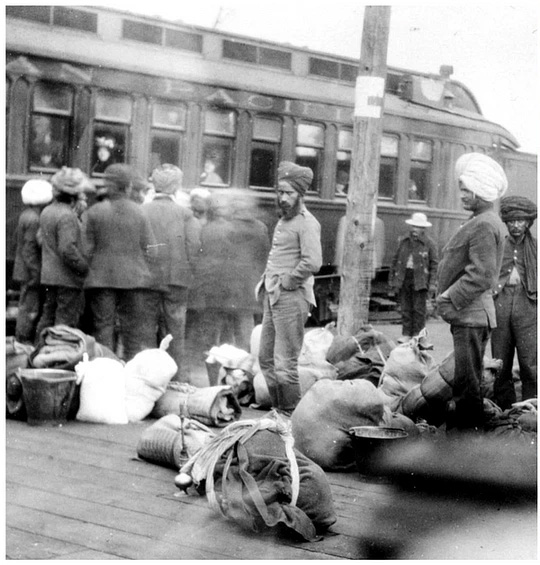 After the Bellingham Riots on September 5, 1907, many Sikh mill workers sought refuge in Vancouver | University of Washington UW18744

On September 5, 1907, in Bellingham Washington, just 40 kilometers to the south, gangs of white thugs rounded up the city’s East Indian mill workers and ordered them out of town. Many headed north to Vancouver by train or on foot to escape the violence, but they would find little refuge. The AEL had already placed South Asians clearly in its sights, with demands to prevent the landing of the steamship Athenian because it was carrying 150 ‘Hindus’ from Hong Kong.

As the South Asian refugees arrived at Vancouver AEL organizers forged ahead with a plan to parade through the streets, carrying signs and flags calling for “A White Canada”.   On September 7, 1907 while a huge crowd listened to speeches outside City Hall, Lieutenant Governor James Dunsmuir was hung in effigy — not as a ruthless anti-union coal mine owner — but because he refused to give assent to legislation that would further restrict Asiatic immigration to BC. A capitalist to the core, Dunsmuir exploited immigrant labour to keep his profits high.

The parade and rally turned violent. Thousands of Asiatic Exclusion League supporters and members of the general public rioted, marching into Chinatown destroying homes and businesses. Windows are smashed, stores looted, and many Chinese people are beaten. After venting their fury on Chinatown, the crowd headed to Powell Street to attack Japanese citizens. However, the Japanese community was forewarned and the crowd is beaten back.

By 1921, the Asiatic Exclusion League, somewhat dormant since the 1907 riot, resurfaced and claimed to have 40,000 B.C. members. Pressure from this group led to the passage of the Chinese Immigration Act of 1923, which ended virtually all Chinese immigration to Canada. Only teachers, church personnel and consular staff are allowed in. The impact of this was immediate: Asian workers made up 20 percent of the workforce in 1918, yet only 12 percent by 1925. Over the next twenty years, no more than 50 Chinese immigrants were able to make their way to Canada.
It took until 1947 for The Chinese Exclusion Act to be repealed. On April 22, 2018, the City of Vancouver formally apologized to the Chinese community for their role in creating legislation, regulations and policies that contributed to the historical discrimination faced by the community. This followed a formal apology from the Provincial Government of BC in May 2014 which included the creation of a legacy fund to support educational initiatives.
Categories: EducationHistoryPast & Present
Tags: asian heritage monthBritish Columbialabour historyrace riot